A Day in Krasnoyarsk

I arrived in Krasnoyarsk early morning, and my homestay host greeted me at the train station. Just about 15 hrs away from Irkutsk, it seems that not many travellers on the eastward Trans-Siberian stop at this town, pefering to ride a little more to Irkutsk and Lake Baikal. 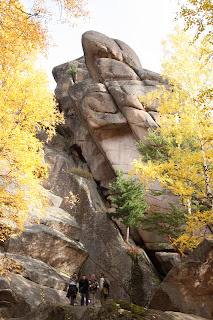 The main attraction in Krasnoyarsk is Stolby Nature Reserve, where strange rock formations (known incidentally as stolby) in a taiga forest are the main course. So I enquired about getting there via public transport, preparing to go immediately as this was the only full day I had in Krasnoyarsk. Apparently, I have two choices - the main central reserve and a ski resort area. The central reserve is a big area, with lots of walking opportunities and lots of the rock boulders. It is recommended for a full-day trip, and served by bus 37. The ski resort is, well, a ski resort, with a chairlift up the mountain, a restaurant and a recommended good-value cafe. Served by bus 50 and the preferred choice for half-day trips.

By the time I reached town though, it was noon. And so I decided to take bus 50. However, the boy "conductor" on the bus looked like a zombie whose sole purpose is collect money and issue a ticket (ok, that *is* the job of the bus conductor). But when I pointed to a piece of paper with 'Stolby' printed on it and said, "Stolby! Stolby!", he gave a blank expression and carried on its sole purpose. After a while, with the scenes outside not looking like any ski resort, I felt uneasy and asked the boy again. This time, he went to the driver, who gestured and pointed back the way we came. And so I've missed my stop.

By the time I reached my destination, it was close to 2pm. As I walked about and tried to orientate myself, two guys came along and asked if I am going up the mountain. I said yes, and they invited me to walk along. I was wary, but being a Saturday, there are lots of people around and I was put at ease somewhat.

Only the older of the two guys spoke English; Sengey runs some sort of shop in town while Nikita appears to be his assistant. After walking for almost half an hour, we came to some sort of an "entrance" area, with a cafe and some shops. Sengey bought a cup of tea (made out of 10 ingredients, no less!) and gave it to me. I asked how much was it and wanted to pay him, but he replied cheekily, "What? I don't understand!".

I thanked him for the hospitality but some part in me was still very wary.

There are *alot* of people having their day out in Stolby Nature Reserve. After more than an hour of walking, the stolby finally came into view. 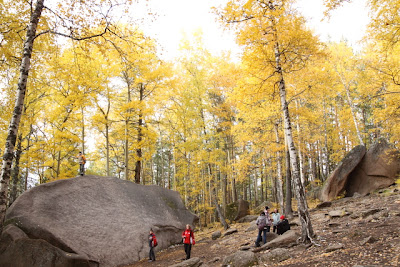 "You want climb to the top, ok?" asked Sengey. 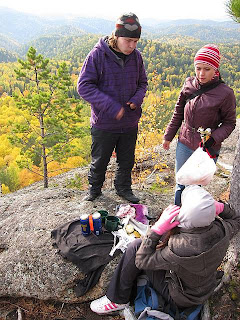 "Sure!" I said, not exactly sure what I am getting into.

Somehow, Nikita had also managed to befriend two girls who wanted to climb the rocks. So five of us began scrambling up the rocks, with Sengey and Nikita leading and showing how and where to step and where to handhold. Some parts were in fact, quite dangerous, but caught in the excitement of it all, fear was a secondary feeling.

But there was no regrets. Atop the stolby, the view is quite magnificent. Right smack in prime autumn season, the scene around us is a sea of yellow. I couldn't stop smiling as I love autumn scenes as much as winter scenes, and this is among the best I've seen. After the photos, we had a mini picnic. Thankfully, I brought some apples and bread to contribute, otherwise, I was beginning to feel embarassed by their hospitality. 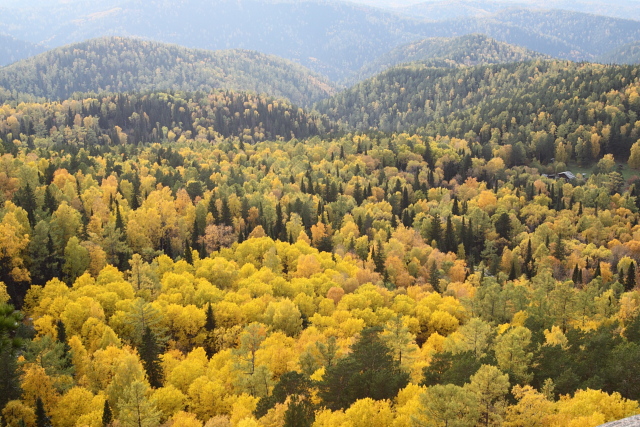 The climb down was just as challenging, with some parts requiring ropes to be tied to our waist and almost literally being hoisted down. By the time we came down from the stolby rocks, it was almost 6pm. While the girls left the way they came, Sengey offered to bring me down via another path, showing some other stolby along the way. It was getting dark though, and it seems we were the only ones left.

"Would this be some elaborate scheme to rob me?" I wondered as I followed Sengey into the darkening forest path.

I was shown the other stolby with names like 'Granddaughter'. 'Grandfather' and 'Grandmother' (and of course, now I can't identify which is which in my photos), and before long, we were back to the main track back down to my bus stop. As we parted, I remembered something Sengey had said along the way, 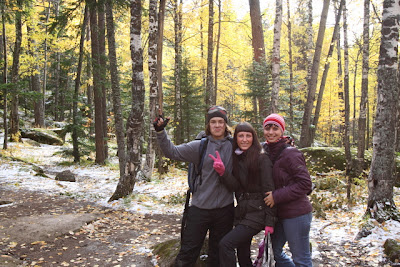 His words had hit me somehow. Did he sense my mistrust? He and Nikita had shown nothing but hospitality, and I felt a pang of guilt for the few moments of mistrust I harboured. It is a tricky thing - who to trust and who not to trust during your travels. Is there any way to hone this "sixth sense" I wondered.

I reached back to my homestay at almost 10pm.

"How was your day? Did you go to the ski resort or the central area" My host greeted me.

"Oh! I enjoyed my day in Stolby! The autumn views are fantastic! I took the bus 50 to the ski area."

And I realise the only thing I cannot trust is my own memory!!
Posted by Wanderer at 12:26 AM