I woke up to a morning that painted Ūši in a totally different light (literally). Ūši is a campsite and a trailer park, and provided only a few cabins but still, I am its only occupant. It's location though, is excellent. Situated at the northern end of the village, it is just a 20 minutes walk to Cape Kolka.

I started on the trail pointed out by the wizened old owner of Ūši (whom I really can't quite get his name) and before long, the sandy beaches came into view. Scattered onto the beaches were many broken seashells, embedded among tiny perculiarly shaped sand moulds, like jagged thorns on the beach. Was it whipped into shape by the wind or the sea, I have no idea, but as I wandered along the coast, I came upon the end of the cape itself. 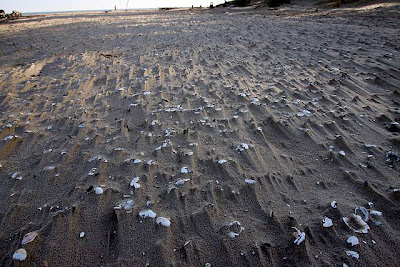 Cape Kolka, or Kolkasrags, holds a dramatic position on the northwestern edge of Latvia. The tip of the cape, like the tip of an arrow, points to the dividing line between the Gulf of Riga and the Baltic Sea. And as I stand watching, the waves from the gulf and the sea came crashing onto each other from different direction, criss-crossing over each other. Perhaps it was not the right time as the impact was not as dramatic as I thought, but nevertheless, it was an interesting sight!

As I stood watching, a man came wandering by and I nodded and smiled at him.

Although with limited English, it was enough for simple communication. His son was in the shipping industry, and had visited Singapore once, so he knew about Singapore's port status.

I gestured with my hands, moving my hands together to simulate the waves crashing onto one another. 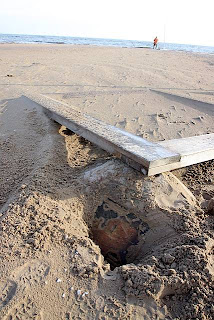 He started to try to tell me something about Kolka, afterwhich failing, brought me to a section of the beach. With a stick, he started digging furiously and soon, uncovered the face of a granite rock. Inscribed on it
were an outline map of Latvia and the surrounding region. Below the map were the words "Kolka - Cross-point in Europe"!

I did not quite understand what this cross-point referred to, nor the explanations given by my friendly Latvian "guide". As I examined the rock, the man joined his friends and son combing the debris on the beach. 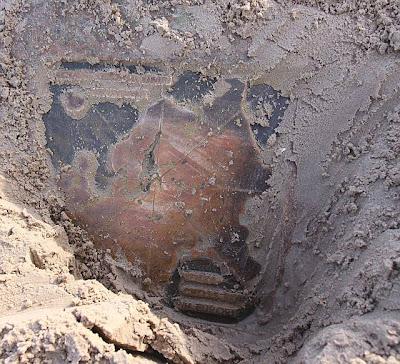 Curious, I wandered nonchalantly by, and again, my impromptu guide offered an explanation.

He fished into his pocket and produced several orange stones and repeated,

It was another interesting discovery for me, as I have not known of semi-precious stones (presumably) washed ashore from the sea before. As my eyes scanned the tangle of seaweed, twigs and rocks on the beach, he took a piece of the orange stone and handed it to me! What a generous gesture, and I had only just met him! He then called his son over, who offered the English name - Amber. I then realised this is Baltic Amber, which must have certain renown as I saw many shops in Tallin and Riga selling such jewelry and ornaments. I thanked them, and after a while, bade them farewell and continued my walk around the area. 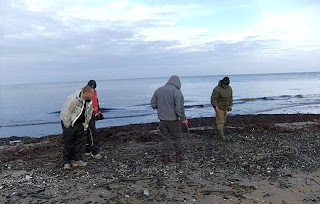 At the edge of the Slitere National Park, Cape Kolka hosts many migratory birds, sometimes as many as 60000, the information guide provided. These birds would feed off small fishes, clams and such. This could explain the many broken shells on the beach. Further away, along the northwestern coast of Latvia, are a number of villages which are easier to access by car. It was a pity I couldn't visit them as these villages are supposedly untouched by time and in fact, are home to a diminishing group of Latvia's ethnic minority known as the Livs. Sadly, it is said that their language and culture is on the brink of extinction and what would eventually remain are just documentation of their existence. Just like the status of Cape Kolka, where at one point in time in ever-evolving Europe, it could have been the middle of Europe (which I guess is what cross-point meant) but is now but a buried piece of information. 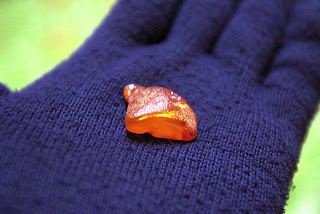