I started my trip with just a very simplistic strategy. All I had was a high level route that cover my dream goals : the Trans-Siberian, the Northern lights in Finland, then down to western Europe to catch cheaper flights to South America for Patagonia etc.

Somewhere along the way, a fellow traveler's Facebook album titled 'Barrow to Ushuaia' caught my eye. It didn't quite register in me what that may mean until a while later. I looked at my journey and realized I had similarly traveled from one end of the globe to the other! In fact, with my Antarctic trip, I had traveled from beyond the Arctic and Antarctic circles - 68 degrees North to 68 degrees South! 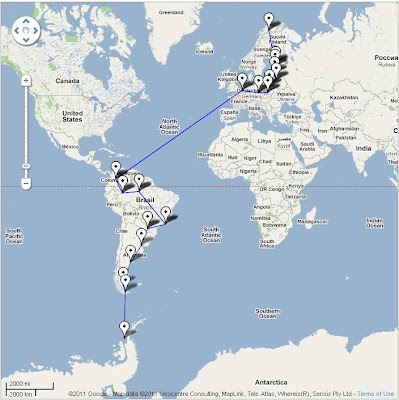 It was nothing special really - it was not like I've done it purely overland or the whole journey was on a bike etc; it was just a portion of my journey. But the notion of traveling from one circle to the other does sound unique and intriguing and I thought perhaps I should write something special about it.

And so, after many hours on the buses (and boats), here's a little "rambling" to commemorate my journey from the Arctic Circle to the Antarctic Circle. There are many references to my blog posts, so for those who have not been reading my 'Roving Random Ramblings' blog, feel free to check it out! ;)


Above the Arctic circle, my tale will start,
The village of Kilpisjärvi, my journey depart.
On the quest for the Aurora, I would be,
Oh, these magical lights, I so longed to see!


Santa Claus himself, in Rovaniemi I meet,
But alas my quest, ended bittersweet.
The Finnish Lapland, I had to leave behind,
As more adventures out there, I sought to find.


From Helsinki, to Tallin, a ferry I rode,
A most Wi-fi country, even the buses become nodes.
In Tartu, I discover, the childhood in me,
The toy museum I wandered, childlike in glee.


Southward to Riga, the party town welcome,
The hostels at night, pubs they become!
A gift of Baltic Amber, in Cape Kolka I did get,
A march of Latvian pride in Liepaja, never will I forget.


But the misadventure in Klaipėda, I lamented so,
The star attraction of Curonian Spit, I failed to go!
In Vilnius, I explore, museums and galleries galore,
Never have I, been so arty before!


Onward to Warsaw, where Cricovan wine I imbibe,
Then in Krakow, the horrors of Auschwitz, I barely could describe!
The ski town of Zakopane, my next visit entail,
Snow greeted me, and pleased me, always without fail!


An Eurolines bus trip, to Prague I booked,
A Frenchman I met, whose vocabulary I got hooked.
The city itself, so pretty covered in snow.
But it was Český Krumlov, who almost stole the show!


Based in Písek, a Singaporean friend well met,
From him, a home cuisine, I managed to get!
A flight I then take, to Brussels I land,
A night of waffles and mulled wine on Christmas market stand.


In Bogota, I began, my South American foray,
But passport got pilfered, on barely the second day!
A month I waited, for replacement to arrive,
And thus my trip to Venezuela, this delay did deprive.


In sleepy Salento, my coffee cravings did appease,
But not the sleepless gal, who kept crying "Stop snowing, please!"
Counting down in Cartagena, I wished my luck to turn,
Atop the colonial walled city, the pyrotechnics burn!


Receipt of my new passport, with breath bated,
And flew to Leticia, my new route dictated.
On the tri-border chaos, I wandered and wondered,
Now am I in any country, I mused and pondered.


Then to Manaus on a riverboat, along the Amazon no less,
The culture shock in hammocks, I could never had guess!
Trekking the Amazon jungle, an experience unforgettable,
With tarantulas, killer ants, and even grubs palatable!


Sped down to Rio, dancing to the rhythm and beat.
A city of revelry, and plenty of... meat!
Watching a glorious sunset, on the beach of Ipanema,
This wondrous show, better than any in the cinema!


22 hours of bus ride, I had to sit through,
To reach the wonders that is Falls Iguazu.
Covering two countries, and both sides I saw,
Each has its strength, and each has its flaw.


But based on my experiences, if I may so opine,
I have to say, I prefer the side Argentine.
Then downwards and southwards, more hours on the bus,
Reaching Buenos Aires in 18 hours plus!


And just in time, it's Lunar New Year in Singapore.
But instead of chewing bakwa, it's vacio steak I tore!
Despite the lack of angpows, of auspicious red,
A bottle of red Malbec to put me to bed!


Then over to Peninsula Valdez I stop, and across Magellan Straits I go,
Before I know it, I'm at fin del mundo!
Excitement bubbled, when I went shopping around,
A deal I've got, and I'm Antarctic bound!


Sergey Vavilov, is the name of the ship,
That would sail us on this amazing trip.
A cruise it is not, when we brave the Passage Drake,
Sickness will afflict all, make no mistake!


But celebrate we did, on crossing the Circle,
And the world around us changed, oh what a spectacle!
There were seals and whales, and penguins spotted,
But it was the icebergs and glaciers that got me besotted!


In Marguerite Bay, we reached our southernmost mark,
Then to the continent proper, we thus embark.
Captivated I was, that I longed so much to stay,
Though the memories I'm sure, will remain till the end of days!


A fitting end to a journey so magical,
That had me raving and rambling so lyrical!
And thus the globe I've traveled, one end to the other,
And so my tale will end.... but I hope I have another!!
Posted by Wanderer at 10:44 AM No comments: