The spectators streamed in slowly. The air thickened as the crowd thickened, though not in the manner of breathable air. At over 4000 meters, the air is thin. I resisted the temptation to redeem my free popcorn and drink, saving it for later. And moments later, the speakers cackled to life with the music from the movie 'Rocky' - 'Eye of the Tiger'. Right on cue, a man walked into ringside, proclaiming a great deal of litany with some extravagance.

I didn't understand a single word of it since it was in Spanish, but I could guess. Having watched WWF on TV when I was younger (WWF does NOT stand for World Wildlife Fund here), I was not a stranger to the scenario. In fact, it was almost identical to what I've watched on TV. I would never had imagined myself paying and watching a live wrestling match, but here I was. But this was no ordinary wrestling match. Like most tourists here, we were here to watch the cholitas wrestling. 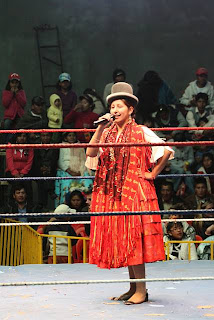 Before the cholitas made their appearance, there were the usual show 'fillers'. Wrestlers with strange masks; wrestlers in tights, bearing comical skeletal prints; wrestlers wearing army uniform. They could do with more imagination though, with many stints seemingly copied from the American shows. But no matter, the highlight were the cholitas.

They strutted out into the ring with full fanfare... and full 'plumage' - extravagant traditional attire complete with their hat and plait. There was the customary parade round ringside, and then instigating the crowd to a frenzied cheer. And then, of course, the usual behind-the-back-attack by her opponent, and the fight is underway!!

The punches and kicks were so laughingly fake, it was more painful for me to watch than to be on the receiving end of the attacks. But the agility of the cholitas within their voluminous skirt were nonetheless impressive. There were nothing to stop them from executing all the high-flying moves! I had thought a strange sight when I saw Peruvian women playing soccer in their hats and skirts, but these Bolivian cholitas have topped that!! And stranger still was when after the male opponent had slammed the poor cholita into a wrecked heap on the ring floor, he had the graciousness to help her adjust her skirt to cover her bottom to protect her modesty, before delivering a 'vicious' kick to her belly. Weird!... 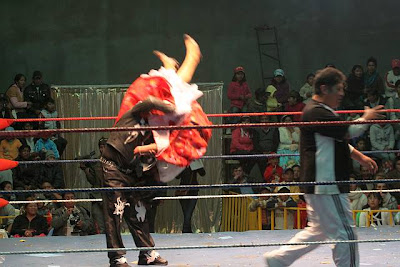 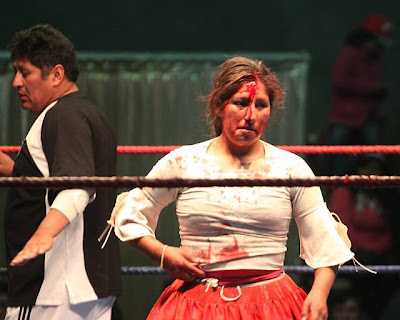 But take nothing away from these athletes - for that's what they are. At El Alto where the event takes place every Sunday, the altitude alone makes any strenuous activity a chore, let alone high-flying wrestling. And some of these cholitas are housewives (poor husbands!) from low-income families earning extra income, and it takes alot of training to be able to come out and not sustain any injuries. And like all wrestling, it is all about entertainment. And when the last match just ended, a voice screeched over the PA,

"Those who came by the tourist bus, the bus is leaving soon. Please leave ASAP!"

And while the tourists stream out of the hall, the kids (what are these Bolivian children doing here?!) all rushed into ringside; some tackling the wrestlers present, others just yelling and jumping around, and it was total mayhem in the ring.

Yes, this is entertainment! 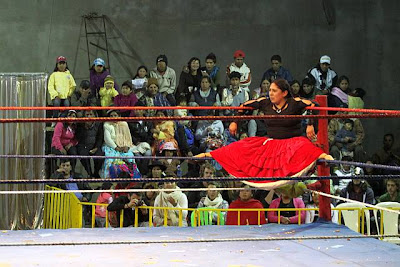