The winds swept across the grassy ground, fluttering the lines of faded prayer flags strewn across the mountain face. Dull grey clouds hovered in the sky as we sat down and prepared to wait one and a half hours for the ritual to begin. 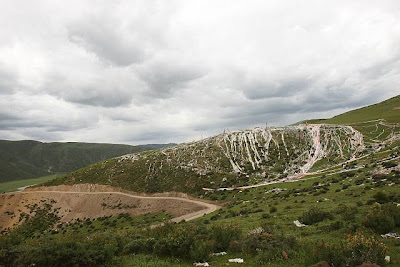 I was lucky. I had missed the shared tourist minivan but a driver sharing the room with me in the guesthouse was also scheduled to visit the sky burial ritual with his two clients. Two kindly ladies who are lay-followers to Tibetan Buddhism, they had no problems for me to tag along without any additional payment. And being lay-followers, they easily struck up a friendly discussion with the lama "guarding" the burial site.

The Serthar sky burial site is apparently a well-known site, with rituals held every day. As one of the local Chinese visitors in Serthar dryly commented, there is death everyday. A Tibetan practise, the "burial" involves the corpse being offered to the elements after a certain ritual. The stone pedestal in this site in which the ritual is performed on was imported from India some 20+ years ago. Bodies come from all around the region, including Qinghai, Gansu and as far as Tibet! The lama recounted that during the Yushu earthquake a few years back, this site performed the highest number of burials in a single day - 120!! And just the day before, he further commented, there were 11 corpses! How many will today being?

The grey clouds began to shed droplets of rain as we reached an hour before the ritual. Our lama chuckled and said,

"Look behind you" in his Tibetan-accented mandarin.

We turned around, and there hovering above the mountain ridge, hundreds of vultures circled the skies expectantly. While we (as well as the lamas) had to rely on our watches, their animalistic instincts had been honed to the ritual timing...

At 1.30pm, the lama beckoned to the two lay-followers and we moved to the actual grounds. From their bags, the two ladies fished out a small little container. They certainly had been informed or have read up on sky burial rituals. The lama nodded and indicated that the cut fingernails and hair should be placed on the ritual pedestal. Apparently, by placing your fingernails and hair there, and with the lamas performing the rituals, you could somehow achieve the karma of a "sky burial" when you are finally laid to rest wherever you are. One of the ladies suggested that since we are fated to visit this together, I should also do the same. She promptly produced a nail-cutter where I snipped off a few small pieces, as well as a tiny tuft of my hair using my swiss-army knife. And as instructed by the lama, we then circumambulate the stupa in front of the burial ground - the number of rounds as dictated by one's age. And so as I trudged round the stupa in what seemed like eternity, a cold dreary drizzle began, as if in preparation of the mood ahead.

A motorbike sputtered into view bearing the first corpse. In response, the vultures congregated close to the ritual grounds. It was an unsettling sight, the hoard of vultures bearing in so close. So much so that a few monks had been deployed to keep them at bay. The air felt fetid, the atmosphere somber and even with the drizzle and the shuffling of the watching people, time seemed to suddenly freeze. 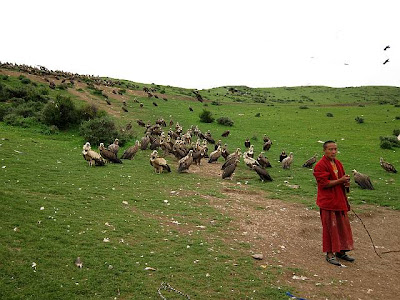 I had decided not to describe the process. Photos were also not allowed, although the two lay-followers had come to good terms with the lama apparently, and he whispered to the driver and me that  we could take some pictures discreetly if we wanted. Both of us just watched.

Somewhere in the middle of the ritual (which were performed by a different person), the sun appeared and bathed the site with light. Our lama chuckled again, and pointed to the side. The waiting vultures, wet from the drizzle, were sunning themselves quite spectacularly! It was quite a sight. I left the ritual grounds to take photos of the vultures. Watching the ritual performed on one corpse is probably enough. There were three adult and (gut-wrenchingly) one infant corpse. 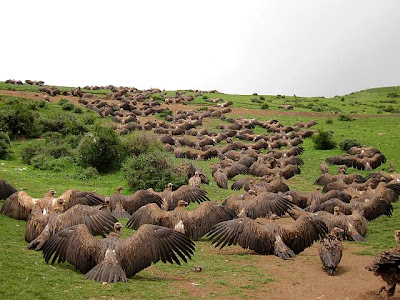 These lamas (or Buddhism) view them as just a shell, devoid of spirit or consciousness, and so treat them as such. But the very human trait in us would not and could not face these sky burials as calmly as them. I have seen death or dead bodies before. But here, it was a different experience. Inevitably, a grimace will fill your face, and your heart. And with a shout, the ritual was complete, and the floodgates were opened. The vultures hopped, flew and swarmed over the remains in a feeding frenzy.

"And so, irregardless of your status in life, in death, you will be returned to earth/nature," intoned the lama.

I just nodded numbly.
Posted by Wanderer at 2:44 PM 4 comments:

She looked at my printout and then on her computer screen and a frown soon flashed across her face.

"Sir, do you have a visa?" The young girl at the AirAsia check-in counter asked.

"No, Singaporeans don't need a visa for less than fifteen days in China." I replied confidently.

"But you only have a 1-way ticket sir. Do you any other tickets out of China?" she further queried.

"No, I may be using bus or train, so I will be getting my tickets only when I am in China!" I replied not-so-confidently, my heart sinking a couple of notches.

"Sir, I can't let you board the plane unless you show proof of onward travel." She droned.

My heart sank further. This was the second time I had encountered this. Just a week plus ago, on my flight out of South America, I was also refused my boarding pass at the check-in counter in Buenos Aires airport.

At that time, I had thought that the world had conspired to keep me in South America. With the Chilean volcano ash cloud, my flight time was changed without notice to me, and then my check-in was deterred. Similarly, the Iberia staff had refused to issue the boarding pass unless I show proof of onward travel out of the EU. But luck was on my side then. While my original plan was overland travel through Europe to Turkey, somewhere along my trip in South America, a group of friends had tempted me with a customized photographic trip to Western Tibet, a place I had longed to go. So I had decided to join them and bought my flight tickets. Unfortunately, there were problems with obtaining my Chinese visa, and I had to forgo the trip. My tickets however, were non-cancellable; so I had proof of onward travel (out of Europe)!! And of course, I made it back to Brussels.

But now, here in the Kuala Lumpur low cost terminal, my flight to Chengdu was my last known transport to anywhere. I did not have any onward travel.

"Why can't I board the plane? I can go in China visa-free for fourteen days, and I can extend my visa and/or get my plane or bus tickets when I am in China! I never had any problems before. This is not my first time to China. Can you check with your supervisor please?" I tried to argue.

"Sir, it's our policy sir. Ok, I will check with my supervisor."

She returned with the same answer. And we had a remarkably similar exchange again on why I can't get onto the plane and why she can't allow it. Finally, she attempted to ask another (presumably) more senior supervisor. As she approached him, I moved forward to try to talk directly to this man, who certainly appeared a little more senior in years.

After another frustrating exchange, while he appeared more sympathetic, the result was the same.

"But I didn't have any problems before, when I had my one-way flight to Beijing. Why is this different?" I continued to argue.

"Ah, Beijing is different. You know China, each part is different, and their rules always change. We have our rules and they are very strict!" he explained.

Not particularly convincing, I thought.

"And if you are refused entry at the China immigration, you'll be turned back here!" he continued.

"Ok, I will take the risk lah. Just let me board the plane!" I pleaded desperately.

And, of course, the airline would get fined. Why do they need to care about me.

Luckily, Kuala Lumpur's LCCT had free Wifi in the terminal. So I used the same trick I used for my Brazil visa application. I looked for an online flight ticketing site that provided offline/delayed payment. I booked my flight, made sure my flight details and reservation number were clearly on my laptop screen, and rushed to the check-in counter again.

My flight was 6:15pm and it was already 5:30pm when my luggage finally got checked in.

"Got time to get my dinner or not?" I wondered aloud.

"Sir, you have to get to the boarding gate NOW!" the girl stressed.

It had been a long day. I hastened towards my onward travel.
Posted by Wanderer at 1:08 PM 1 comment: